This dusty old perfume bottle is something I have kept for more than twenty years. My husband brought it back for me from either Romania or Czechoslovakia, in the early 1990s, I’m afraid can’t remember which. After meeting at school the age of twel 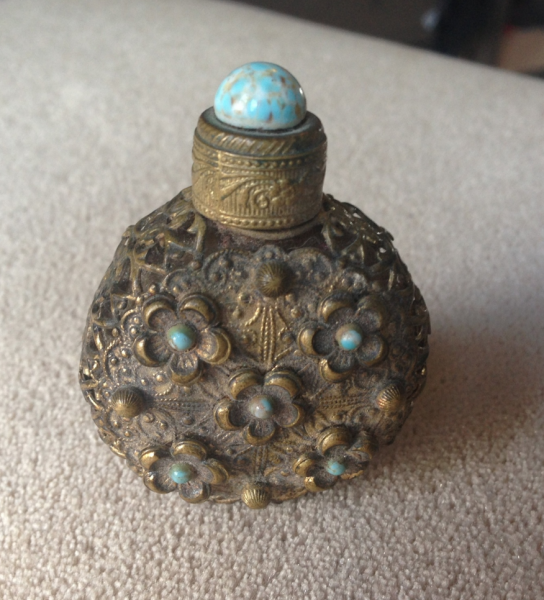 ve, we had dated on and off from about the age of fifteen. I always knew I was in love with Adam, but I never quite felt ready to face it. I suppose I felt afraid of the ‘bigness’ of it all. We were in our early twenties when Adam gave me this perfume bottle, and it would another twenty years before we eventually got together for good and got married.
On the day he gave me it to me, I hadn’t seen him for several months. A rock guitarist at the beginning of his career, he’d been touring Europe with a Heavy Metal Goth band called Christian Death! He had plenty of tales to tell of being on road, getting chased out of a amphitheatre in Italy, by baying crowds, coming back to a B&B they were staying in to discover the owner had the band’s rooms out to other people, getting chased across borders by armed guards!
I remember thinking that his life was so much more exciting than mine, and that it was going in a completely different direction, but I always had faith in him. I knew how much he wanted to be a musician, and I had always known that he would make a career out of it, because he wasn’t the sort of person to give up.
He had a sort of faith in the future that I just didn’t have back then, I couldn’t imagine a world where I would be allowed by anyone to do my dream job, of being a writer. I so admired him for his determination and ambition. Nothing seemed impossible to him.
We weren’t together at that point, I was going to university in Hull and he travelled all over the world chasing his dream. But when he got back to the UK, after that tour, he came to see me, and he brought me this perfume bottle, which I instantly loved.
I filled it with Body Shop Rose Oil perfume, which I wore a lot at the time, and the bottle still retains its scent. One sniff and I am taken back in time to that moment. I remember a warm evening, my long green skirt with the tassels around the bottom had little bells on that jingled when I walked. I remembered kissing him and his long hair tickling my cheeks and somehow knowing that our story had many more pages to be written.
I must have moved more than twenty times in the years since, but I have always carried this little perfume bottle with me, and now it sits on the dressing table in the bedroom that I share with the man that gave it to me all those years ago, the man I eventually married.